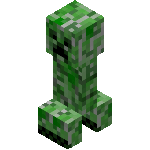 Minecraft have various characters to watch out for such as; Creepers are hostile mobs that emit a hissing sound followed by an explosion when in close proximity of a player so Be careful!!

they spawn underground but at night or in dark locations they will rise and spawn on the surface.

Blazes are a flying mob. These Minecraft Characters  shoot fireballs and spawn in The Nether!!

Skeletons are hostile mobs that shoot arrows at players if they spot them so be alert!

They will spawn at night on the surface as well as

in unlit areas and caves, you have been told!!

If they are exposed to sunlight then its goodbye as they will catch on fire. Skeletons move quickly making them difficult targets to hit however when a Skeleton’s arrow hits another aggressive mob then that mob will attack the skeleton. with abit of luck they drop an enchanted bow for you!

Wolves will spawn in well lit, grassy areas, will attack nearby sheep, and only attack players if provoked so be nice!!

You’ll get  no loot if you kill them. If your brave and can give them enough bones,  a puff of heart particles appears and it gains a red collar, meaning you have tamed it. Warning!! If a wolf turns hostile, it can no longer be tamed and it’s eyes will glow red (creepy!) Minecraft wouldn’t be Minecraft without these characters!!

The main character in the Minecraft character list has got to be the player him/herself really has it not?

the character you start with is called Steve but you do have a choice of Alex aswell who I will cover next.

Steve always has an aqua top and blue pants as his costume which in Minecraft is called “Skins” however you can change these skins and actually design your own at anytime.

Steve’s appearance shows that he has dark brown hair, dark skin, nose and mouth, and blue eyes, with a light blue shirt  a pair of blue jeans, grey shoes, and 4px arms. His Shirt is untucked on the left hand side and in the back.

Alex is the other character skin you can start off with and has you can see his appearance is very different to Steve’s, He reminds me of Robin Hood or an outdoorsman as he he dressed in green and brown. This skin would be ideal in survivor mode as he’s already camouflaged!

Alex has long bright orange hair hanging to the left side, pale white skin, and dark green eyes, with a light-green shirt again this is untucked on both sides, and a dark green belt wrapped around his waist and a pair of brown pants, grayish boots and 3px arms.

Cats are Made when your able and brave enough to tame an Ocelot. you can treat as you would any domestic cat in real life although Cats in this world or special as you can train them to  sit down but they do love to climb and jump on items of furniture that you want to use such as beds, chests and they love a nice furnace to sit in front of to enjoy the warmth.
You will find they have their own personalities and some will Meow! Meow! Meow! and they all have unique meows! This can be interrupted with purrs though!

If you wasn’t to know, Cats hate water and Minecraft Cats are just the same.

So why are they in the game? Well every character has a purpose and it is a good idea to have a few cats around as guess what? Our not so friendly Creeper is scared of them, yes if confronted by a cat the big tough Creeper will run away from this cute furry creature.

In order to tame a cat you must feed them raw fish and along with taming them this is how you get them to breed once tamed. Just a warning though even though tamed they will attack Chickens as let’s face it even our pet cats still hunt and these are no different.

You can create Snow gollems by building two snow block towers and a pumpkin head.

They attack hostile mobs by throwing snowballs at them and leave trails in the snow as they walk so you will be able to track them.

I’ve added these to the Minecraft Character list as I have never seen one but I will be asking Brandon to make one as they seem like fun! They can catch fire and when they do they will speed up looking for a water source to put the flames out now I would love to see that!

The snowballs they throw are harmless to your character but they have a use as everything does and their snowballs aren’t harmless to Blazes and can also force Endermen out of your housed before they become hostile so very useful to have around.

Snow gollems do not like skeletons and will not stop throwing snowballs at them even if they are out of range.

Endermen are Tall, dark, slender creatures that spawn in the dark and like to pick up and rearrange blocks which can be a nuisance. Endermen are normally neutral however if you just look at them, they’ll go crazy and attack you so they aren’t exactly the nicest of characters. If you manage to defend yourself if attacked then you may be in luck as there is small chance that they will drop Ender Pearls on death.

These creatures do not like water and teleport to avoid water unless they are set on fire then yes you’ve guessed it they will teleport into the water! Don’t bother firing arrows at them as projectile attacks will not work because they will also teleport away.

They can teleport during a fight in order to avoid your sword blows especially if it’s not going their way one might expect! If you are in a fight with one a good tip is to attack their feet, they are unlikely to teleport when you’re not directly looking at them.

Don’t be surprised when you do come across one of these creatures to see them carrying a block that they’ve pinched from somewhere and the y greedy things won’t drop it when they are killed! The annoying thing is they can steal blocks from structures you are building which can be a danger but at least they can only carry one or two blocks at a time.

The first boss mob that was introduced to Minecraft was the Ender Dragon.

The Ender Dragon is a large black female dragon that lives in “The End.”

In order to defend yourself against this dragon, you will have to search for a certain type of Crystal that emit healing magic. Theses zap her with this healing magic but if you destroy the Crystal half way through the process she sustain damage. you must develop your skills for this type of fight as there will be alot of crystals about that she can heal herself with. 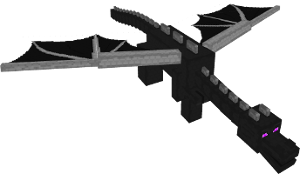 The End is also home to the Endermen which I have mentioned above.

These are black ghost-like entities  and are very spooky!  They will fly through the air with ghost like grace, The wither have three heads, that resemble a cross between a skeleton and a mythical Hydra. 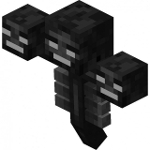 Smaller heads will clone copy skulls and hurl them as explosive projectiles when it attacks and they can and normally will destroy almost any block.

The player has to build it, similar to making a golem, In order to summon one of these you will have to build it similar to the way you would build a golem.