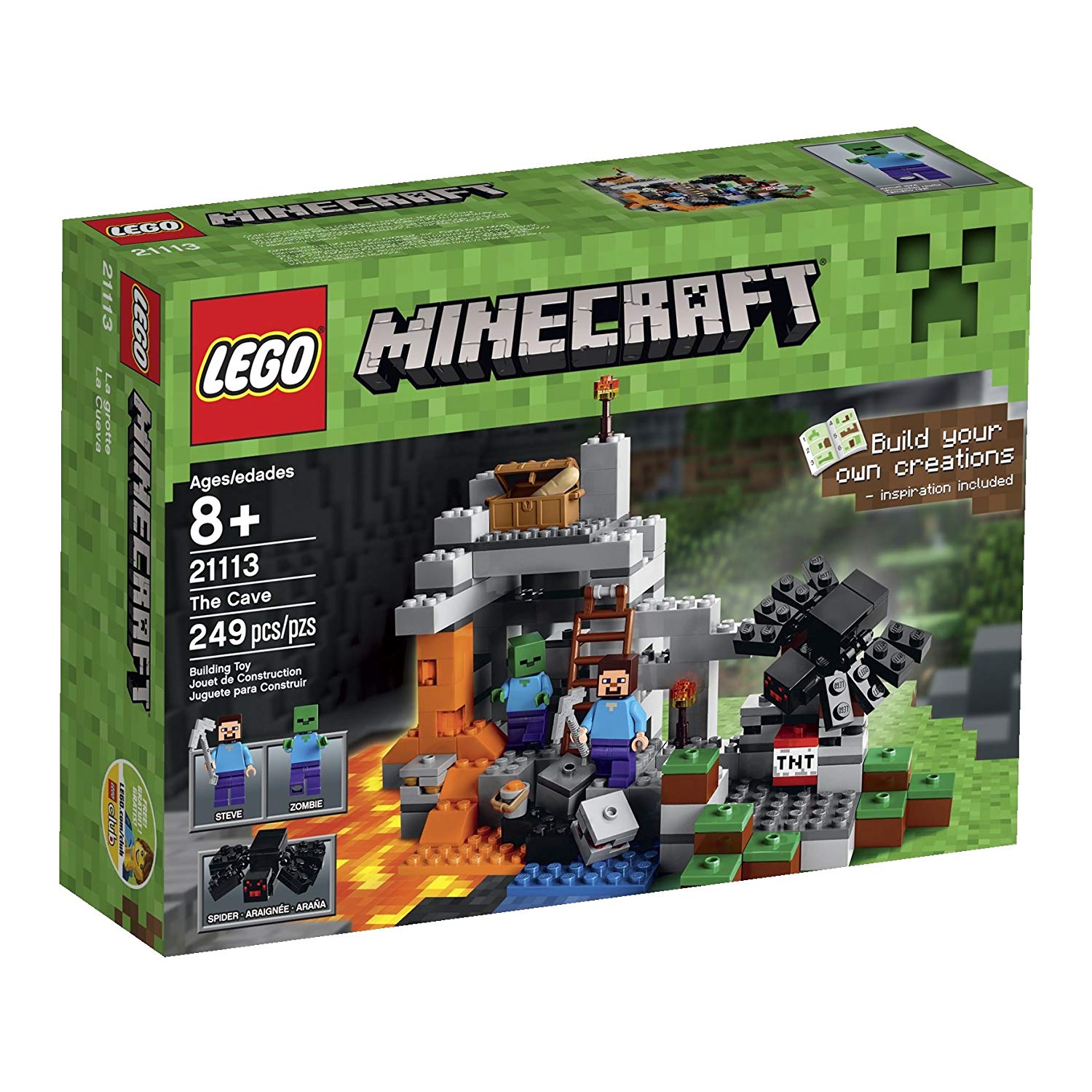 As we know, Minecraft and LEGO are truly a match made in heaven as they both use the same concept to build and that is; blocks!

You cannot find a product that will bring Minecraft to reality more than Lego, as it allows for you to construct your own scenes and characters from the Minecraft game.

The Lego Minecraft Cave is no exception and brings the scene exploding into life!

Stimulate a child’s mind who is Minecraft crazy and let him join Steve in his quest to explore and find valuable resources in the cave. 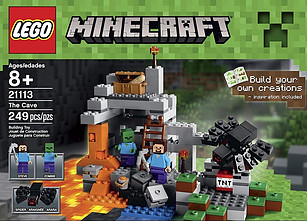 If you dare to enter the cave with Steve then Young builders will enjoy wielding the iron pickaxe to dig and battle against very angry zombies and spiders.

When the kids are finished battling and mining, they can restore their imagination and energy levels with a tasty chest of bread enabling them to keep the adventures going.

The Cave Lego set consists of two mini figures, one being the main character Steve, a zombie and a spider.

The build itself is not complicated and should normally take an experienced LEGO enthusiast around 15 to 20 minutes to build the cave lego set.

After it’s completed it can be fun for kids to play or you can simply display it with other Lego sets and create your own Lego Minecraft world. We are all different aren’t we. My two youngest sons are total opposites.

One always liked to build the lego sets, play with them then break them up and the other would build his Lego sets and display them.

He still has them set up now in his bedroom, He’s 19 now and they have not moved for 9 years! Even after decorating or cleaning they go back in the same position. His brothers have long since disappeared! 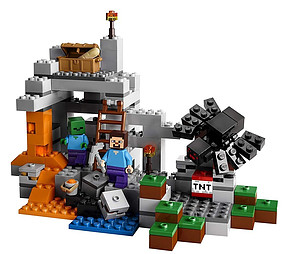 Minecraft Lego sets are highly versatile and all join together to make your own Minecraft worlds. They can also be combined very easily with other Lego themes, especially Star Wars.

Who Is It For?

I think the Lego Minecraft Cave makes a good starter set for Lego Minecraft Novice,  It isn’t too hard to build and it’s very durable with a strong structure.

The building instructions are easy to follow so a child should be able to do this on their own or younger ones may need some assistance but in any event, it creates engagement.

The Cave also comes with a few spare Lego pieces although only tiny ones. I am not sure if they got in by mistake though but they are really tiny pieces which you could lose so I think it’s intentional.

If you want a set that is a quick build but will deliver time-consuming imaginative fun then this is an ideal lego set to buy your child.

It’s a good starter set with a straightforward build process enabling children to try and construct themselves.

Consisting of 249 units it is a decent build but not massive and you can always build your own design if you do not wish to follow instructions.

The best deals online eBay which started from  at:

Amazon UK  did not have many deals, the cheapest was £54 and the dearest £75 click here to view.

The only flaw I could think off with the Minecraft Lego Cave was the number of tiny parts within the set that had a single nubbin- when you place these units in the middle of a stack of bricks (as per instructions then the bricks stacked on top can sometimes make them pop off too easily however I think this is intentional in the design as if they did not pop off easily you could not mine them as these single units represent the resources that you are mining.

One solution is to place them on top of the bricks so then the single-nubbin pieces are easily mined and everything else stays intact.

I recommend pairing this set with The Iron Golem set (21123). The reason I suggest this is because they are both smaller and cheaper sets and you will get a  good mixture of bricks and figures.

Just to recap it consists of 249 of Lego units and prices vary for which I have attached links to the best prices I could find.

I hope you have enjoyed this review and if you have any comments then please comment below.

You can also subscribe to my newsletter by filling out the green form on the right. Please look out for the confirmation Email in your spam folder to confirm your addition to the mailing list!