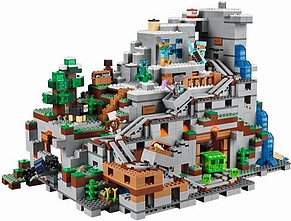 If you are a serious Lego collector then the LEGO Minecraft 21137 The Mountain Cave Construction Toy is a serious bit of Lego!

The price is pretty expensive however if you think of the amount of Lego units per price when it’s broken down then you will understand why. I will explain this shortly.

The experience you get building  Minecraft’s Mountain Cave and all its features will give you an amazing sense of achievement once you complete the project.

The Mountain Cave has some great features including a mine cart track with a red stone powered minecart elevator, and a vast array of other features and functions.

You can contend with TNT blasting, a rotating spider‑spawner charged Creeper™ explosion plus a lava burst.

You can position the light brick to light up and illuminate the rotating spider-spawner, wall of red stone, jack o’lantern, first-night shelter, furnace, lava or the torch above the cave entrance while enjoying a hands-on Minecraft adventure!

The LEGO Minecraft 21137 The Mountain Cave Construction lets you act out scenarios with your favorite characters including Steve and Alex plus a charged Creeper that is included with other Mobs totaling 13 in all that consists of a cave spider, wolf, baby wolf, slime, 2 small slimes’, 2 bats, zombie, enderman, skeleton, sheep. 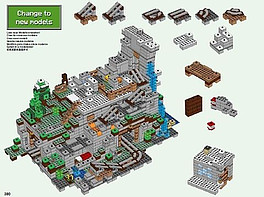 There are many places you can buy this product from however if you want the piece of mind then you cannot beat Amazon for there speed of delivery.

I would recommend only buying from sellers that have their stock fulfilled by Amazon. Not only will it be delivered by Amazon but you are then covered by their customer service regulations.

This is based on the amount of detail that has gone into this product and how detailed it is. I must stress again that this is a massive Lego set that once built should stay assembled.

Although these prices look very expensive and I agree with you, I just wanted to take a moment to break the price down. Products are priced to take into consideration the cost of making the product. In order to make a product, you require staff, materials, machinery, fuel costs, distribution and the mark up from stockists.

The Lego Minecraft mountain cave has 2863 Lego units in the set. When broken down that works out to 9 pence/cents per unit once all of the above has been worked out.

The dimensions of this Lego set will need a decent sized space to display it once you have built it as it measures in at:

So be sure you have the room!

It also weighs in at 5.1kg or 11.24lbs! This is truly the biggest Minecraft Lego set that has been produced!

Who is it for?

As I have mentioned this is a massive Lego set and therefore Lego advises an age of 12 years and over. Any younger than 10 years and I expect it would not be appreciated as young children.

I would say that the price bracket classes this Lego set as a set for a Lego enthusiast and serious Lego collector but that is not to say children are not serious about their Lego as I have two at home who are Lego crazy. One builds Lego and they are put on a display cabinet in his room while the other builds then breaks them up. guess who is the eldest and the youngest!

What I would like to make very clear for anyone who is a big fan of Lego and that is you do not have to be a Minecraft fine to build the site as it would be a challenge for any Lego enthusiast.

What’s in the box?

The price unit breakdown is 9 pence/cents as I mentioned earlier. The other advantage of this set is that you can also add many natural colors to your Lego inventory.

Here’s a rough breakdown of some of the pieces that help make up this amazing set:

many basic bricks and plates in white, tan and reddish-brown.

There are other colors involved such as different shades of greens’, yellows’, orange, reds, blues, darker grays, black, and see-through colors.

Although there are so many pieces to put together it is not all a momentous task as with this set like all minecraft sets you can build large pieces separately enabling you to change the design of your Mountain Cave. On the back of the instruction manual it actually gives you alternative layouts that you can try, because of the large units built separately you have the capacity to design your own structures.

There is a moving feature that runs the entire way on the mountain cave set and that is the Mine cart track plus Elevator. A set that will really compliment this for play is the Lego Minecraft The Nether Railway set. number: 21130

The Mountain Cave Lego set is the ultimate challenge for any Lego Minecraft enthusiast and that of any Lego fan. The price is on the expensive side so be sure that you are going to be serious about building and maintaining this set as it will look awesome for any Lego display.

The structure is really solid and you will have fun playing with it especially when you combine other sets to create your own realm.

I would recommend this set  but for serious Lego fans as it would be sad to build and then smash up only to lose bits and pieces because of the price tag although even then you are bulking up on 2000 plus Lego pieces!

I hope this review helps you and wish you luck on your build!