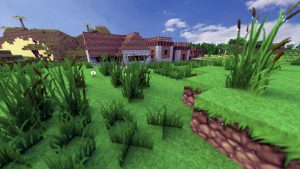 I’ve created this page just for abit of fun but also for Brandon so he can share his favourite  screenshots with you all. If he’s not on the desktop then he is on my phone or his Mums, needless to say we don’t have fully charged phones very often!

The screen shot of the bearded man reminded Brandon of me with a beard and so he wanted to include this as a centre shot. You can see in the background that the land is quite flat with no high ground in sight and the building reminds me of a Mexican ranch building perhaps? 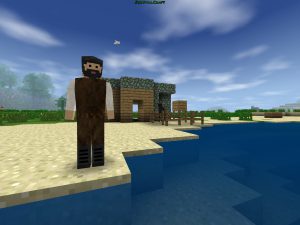 The screenshot below of Steve and the creeper is an unusual one as I don’t think it would happen very often in actual game time but is a nice touch!  they look as if they are sitting on the steps of a log cabin with the start of a forest in the background. 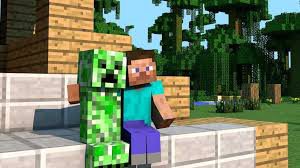 Actually there is a mod that I will be explaining all about Mods on a separate tutorial which are  called: Forestry which deals with farming, renewable energy production as well as the breeding of trees, bees and butterflies in Minecraft.

Here we have a typical landscape from on of Brandon’s worlds. We can see here the terrain that I would typically say is common in most Minecraft scenes. We have sporadic clumps of trees with many rolling hills that are ideal for mining!

This was an actual screenshot Brandon took from my Mobile Phone. in the bottom right hand corner you can make out Steve or Alex’s axe. I think he started playing  on this world during an Ice hockey game when our team were run away leaders at the start of the 3rd period, I’m on to him to make an ice hockey arena so watch this space!!