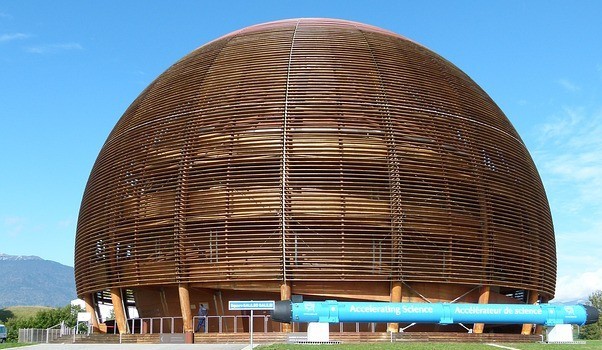 Explore CERN in the world of Minecraft

CERN stands for Conseil Européen pour la Recherche Nucléaire or in English; European Laboratory for Particle Physic. Founded in 1954, the CERN laboratory sits astride the Franco-Swiss border near Geneva. It was one of Europe’s first joint ventures and now has 22 member states involved,

CERN is the home to the Large Hadron Collider (LHC) which is the world’s largest and most powerful particle accelerator.The LHC became active for the first time under much apprehension on the 10th September 2008, The LHC still  remains the latest addition to CERN’s accelerator complex to date.

The LHC consists of a 27-kilometre ring of superconducting magnets with a number of accelerating structures to boost the energy of the particles along the way around the circuit, increasing in speed as they are propelled.

The LHC is the largest machine in the world. It took thousands of scientists, engineers and technicians decades to plan and build, and it continues to operate at the very boundaries of scientific knowledge. CERN

All the controls for the accelerator and its services and technical infrastructure are situated under one roof that resembles a space shuttle control room might I add at the CERN Control Center. Here scientists can control the beams inside the LHC where they can make them collide at four locations along the circuit as they speed around the accelerator ring,

You can now be part of this and you can discover CERN and the ATLAS detector in incredible detail on the gaming platform Minecraft, through ATLAScraft ! you can explore the whole complex as this incredible  virtual world recreates the Laboratories using Minecraft’s signature 3D blocks,

The features include an interactive museum and map where you can view striking images accompanied by detailed explanations and mini-games to explore the world of particle physics.

“The centrepiece of the game is a stunning scale model of the ATLAS experiment, complete with underground service caverns and tunnels for the Large Hadron Collider (LHC). Players can slice open the experiment to reveal layers of subdetectors, watch particles meet at the ATLAS collision point, and play minigames that explain how each subdetector works.”

This virtual world was created by UK secondary school students together with help and guidance from ATLAS physicists. The project was funded by the UK’s Science and Technology Facilities Council (STFC) and the ATLAS Experiment.

With the help of experts, the students became the teachers in ATLAScraft, turning their new knowledge of the detector and particle physics into engaging activities for players that can now experience another real life world!

ATLAS(link is external) is one of two general-purpose detectors at the Large Hadron Collider (LHC).

Atlas investigates a wide range of topics for physics. The most famous is probably the search for the Higgs boson particle to extra dimensions and particles that could make up dark matter.

Beams of particles from the LHC collide at the centre of the ATLAS detector making collision debris in the form of new particles, which fly out from the collision point in all directions. Six different detecting subsystems arranged in layers around the collision point record the paths, momentum, and energy of the particles, allowing them to be individually identified. A huge magnet system bends the paths of charged particles so that their momenta can be measured.

The interactions in the ATLAS detectors create an enormous flow of data, in order to digest this date the ATLAS experiment uses a highly advanced “trigger” system to tell the detector which events it is to record and which ones to ignore.

the process then uses a series of complex data-acquisition and computing systems to analyse the collision events that the system has recorded.

At 46 metres long, 25 metres high and 25 metres wide and weighing in at 7000 tonnes, the  ATLAS detector is the largest volume particle detector ever constructed. It sits in a cavern 100 m below ground near the main CERN site, close to the village of Meyrin in Switzerland.

Amazingly there as of Febuary 2012 the multi national workfore numbered at more than 3000 scientists from 174 institutes in 38 countries that work on the ATLAS experiment making it a truly global human acheivement.

The ATLAScraft project is organised by researchers at the University of Oxford and the University of Birmingham, who guided a team of students from several schools in the United Kingdom in recreating parts of the ATLAS detector in Minecraft.

The students’ creations aim to creatively explain the workings of the ATLAS detector and particle physics research in a fun way, creating a virtual museum dedicated to the ATLAS experiment. Anyone owning the PC/MAC version of the game Minecraft will be able to download and visit the virtual world for free.

The virtual world recreates the Laboratory using Minecraft’s signature 3D blocks, in an interactive museum and map that includes striking images accompanied by detailed explanations and mini-games to explore the world of particle physics.

Attempting to get our Children to understand the workings of things in our world can sometimes be harder to do if that child is not interested in the topic. One way to create engagment is to intergrate the topic into something the child understands and enjoys. Minecraft is perfect for that as many of my articles have proven.

Atlascraft allows access to a truly amazing place that is helping to find answers to scientific questions, now thanks to secondary school pupils from the UK we now have the facility to explore this giant labortory.

Encourage and explore with you your child as this is truly a unique opportunity that is now available to us.